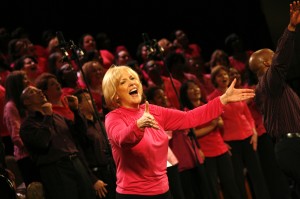 he Battle Hymn of the Republic at the 57th Presidential Inauguration.  Over the last 40 years, BTC has been the recipient of many awards including six Grammy Awards and a cache of Dove Awards while selling over 4 million CDs and recording 28 albums. Leading the charge of this 285 member musical aggregation is the first lady of Brooklyn Tabernacle and founder of BTC, Carol Cymbala.

A native of Chicago, Carol Cymbala is woven into the fabric of Brooklyn Tabernacle.  Her father (the late Reverend Clair Hutchins) founded the church in 1965 and turned the pastoral mantle over to his son-in-law Pastor Jim Cymbala in 1971.  In 1973, Carol gathered together a group of nine to worship the Lord in song and thus organized what would become the Brooklyn Tabernacle Choir. Playing piano at an early age, Carol dreamed of leading a choir but was never interested in being in the spotlight.

Today, BTC has had standing room performances at Radio City Music Hall, Madison Square Garden, along with tv appearances on “Good Morning America” and visits to churches across the country.  But, at the end of the day, the choir’s purpose is people. “God is love and we sing about His love,” Cymbala has said. “If the Brooklyn Tabernacle leaves a legacy of any sort, I believe it will be the story of how God has worked to change the lives of so many broken people.”

The Battle Hymn of the Republic is available now as a digital download on iTunes and Amazon and Love Leads the Way, the new CD from the BTC drops in April .