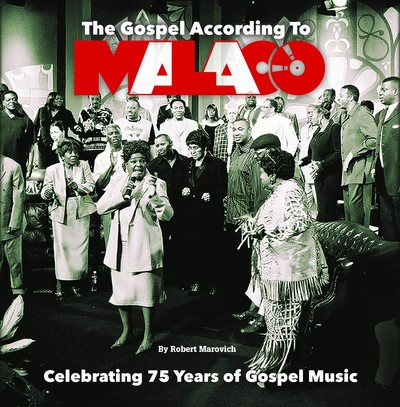 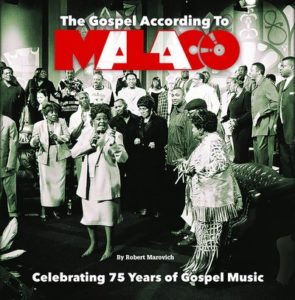 Malaco Music Group opened up its vast vaults to present a Gospel music treasure, The Gospel According To Malaco.  The offering comes in a form of a coffee table bookalong with 8 discs that covers a lot of Gospel music history and the favorite and most memorable songs from years gone by from the Malaco and Savoy labels as well as Apollo, Atlanta International Records, Gospearl and a few others.   GOSPELflava caught up with Gospel music historian and author of A City Called Heaven Bob Marovich who was tasked with writing the essay that would accompany the music.  Here’s what he had to say.

GOSPELflava: Bob, this is long overdue, but we are grateful that this is happening now.  Please give us some background info on the project as well as how you became a part of the story.

Bob Marovich: The Gospel According to Malaco was intended to be a celebration of the 50th year of the company’s history even though their being in Gospel music doesn’t go back to their early days. Malaco had put out a 30th anniversary box set with their Blues, Soul and R & B hits that Robert Bowman wrote the liner notes for, but they thought at this pont in their career, they really needed a nod to Gospel music since it has 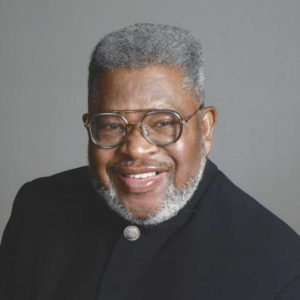 provided so much of their commercial and critical success certainly over the past three decades, and they also wanted to recognize that they have much more than what Malaco was generally known for (the Missisipppi Mass Choir, the Jackson Southernaries, The Canton Spirituals, etc.),   they had this whole catalog and archive that goes back to when Gospel was being sung acapella, so Tommy Couch Jr. and Tommy, Sr decided on kind of combining a coffee table book with the music.  My involvement in the project was that I have been for some time now writing artists bios for the Malaco website. If you go to the Gospel section of the Malaco website, you will find with the exception of about 20 bios that Lee Hildebrand had written early on, the rest are mine.  When they called me a year ago in February and said,  “would you be interested in doing this?”, I couldn’t pass this up.  It just seemed that it was such a great opportunity to chronicle this history. The first thing I did was to get the liner notes from the 30th anniversary box set and read Rob Bowman’s  liner notes cover to cover, just to learn the history and then in April of last year, I had a chance to go to Jackson and interview the staff there and then also from there in between the bios I already had,  I had a chance to interview people like  Rudoplh Stanfield (accompanist for 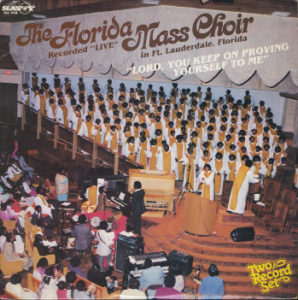 Thomas Whitfield and the writer of the Keith Pringle Hit Perfect Peace) who had been on many of the projects, Rev Milton Biggham (longtime Savoy Records Managing Director), DA Johnson A. Jeffery LaValley (New Jerusalem Baptist Church Choir music minister and veteran producer who worked on a number of projects including Myrna Summers and Florida Mass Choir in the Savoy hey days) , Fredrick Knight, Telisa Stinson, all the people who had been involved in the company going back to their earliest Gospel days. We started in earnest in April and the project took about 7 months to complete.

GF: Of the many treasures included in the set is vintage music from Sister Rosetta Thorpe, The Caravans featuring Shirley Caesar, The Ward Singers, The Roberta Martin Singers, The Davis Sisters, The Dixie Humminbirds, and Disc one opens with the original recording of Mahalia Jackson’s first hit Move On Up A Little Higher that was originally released by Bess Berman’s Apollo Records.  The amazing part of this story is that this recording almost never happened.  Bob, give us the highlights of this story. 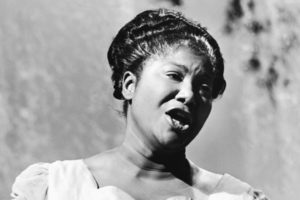 Bob Marovich: Move on Up A Little Higher, yes, it saved her career, matter of fact it made her career. At that point, Mahalia was not having success with Apollo, her records just weren’t selling, and Mahalia was just about ready to give up recording, she had no success at Decca, now, she was having no success at Apollo.  She had been practicing with this song that Rev W Herbert Brewster had written called Move On Up (A Little Higher), a song that she had learned from Queen C Anderson of the Brewsteraires of Memphis, and the A & R guy heard her doing this and said to Bess Berman “let’s try this with her and see if it works.  Let’s record her in Chicago, she would have had to take a train if we record it in New York,  so I’ll go to Chicago, and  I’ll record her in Chicago. So she rehearsed it, she borrowed James Lee from his honeymoonto play for her (because no one told Halie no) but it turned out to be the song and from then on her career was made.  Sadly, Reverend Brewster initially didn’t get credit, the original recording says Frye because Theodore Frye arranged it, Brewster didn’t push the issue, later he got credit but looking at the original recording, one would believe that Theodore Frye wrote Move On Up, but he didn’t.

GF: Of the many people that are crucial to the success of the Malaco Music Gospel operation, one of them would have to be Frank Williams.  Frank has kind of a unique entrance into the Malaco family.

Bob Marovich:  It was so serendipitous. Frank was just coming to Malaco to talk about letting the Jackson Southernaires record at the studio because it was closer to home.  He just walked in and said,  “I would like to do this and it would be easier for them to collect the records and then take them on the road.” Frank had such a great network, as a matter of fact hone 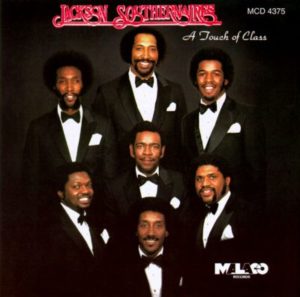 stly Greg, in all of the interviews,  I never had one person say a bad word about Frank, everyone was like this man was amazing, he was the kindest man I ever met, he gave me opportunities that he didn’t ever have to do, so they just had the right guy who used his network and said,  “hey, listen, if you don’t like how you’re being dealt with at XYZ company, why don’t you  come over to Malaco? So he was like the Pied Piper and so all of the legacy quartets like The Soul Stirrers and the Highway QCS and the Pilgrim Jubilles,  Margaret Babe Alison and the Angelics followed suit.  Dave Clark also helped. Often times, we think of Dave Clark in the context of his work with Malaco in the Blues area,  but the fact is Dave Clark from his many years in Gospel encouraged groups like the Nightingales to give it a shot, Tommy Couch said to me that the two most important people in terms of building the gospel division at Malaco were Frank Williams and Reverend Milton Biggham.

GF: Bob, there is even a Malaco Records love story in the book.

Bob: You are correct and its one of my favorite stories. Roy and Esther Wooten.  Esther was in the D. R. Curry Memorial  Choir at Liberal Trinity Church of God in Christ, which just so happened to be the first choir that recorded for Malaco and featured some of the original members of the Mississippi Mass Choir,  anyway, Esther was very shy, she didn’t like to go to studios and record, that wasn’t her thing, needing to do somve overdubs, she sort of grudgingly did it one time and there, she met this man Roy Wooten,  who got her a soda and they got to talking and that was the development of their great love story.  So here it was, had she not gone to the studio that day she would never have met “Mr. Malaco”.  Roy was one of the hardest working people anywhere, hedid everything, not waiting for someone to tell him what to do, he just did it.  He shuffled boxes, he worked the phones like a poltician’s campaign manger, he would call the stations on Christmas Day when the gospel announcers would be sitting their lonely, playing records all day, his hard work ethic paid off.  I thought it was great when Esther said he loved Malaco first, then his children and then me, she knew that Malaco was his first love.

GF: What a great story! The project is unique because it does a great job of encompassing some of the greatest hits in Gospel music.  I was especially pleased when I saw that Douglas Miller’s original recording of Do Not Pass Me By was included from his sessions produced by Mattie Moss Clark and backed by The Trueway Church of God in Christ Choir. 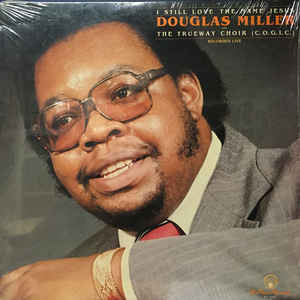 Bob Marovich: I’m glad you brought that one up Greg, when they sent me the list of songs to go through, that was one that I suggested they put on the list.  I remembered that every church choirI heard in Chicago was singing that song when it came out (and some still do) and I thought, we gotta put that on there and they did. Douglas was so instrumental in helping to define a new contemporary sound , that’s the cool thing about this project in general is that, as you and I know, a lot of compilations focus on a specific genre and a specific time period and almost never focus on the mass choir movement, and that was the backbone of Savoy, and then Mississippi Mass was a huge part with Malaco.  It was a chance to tell this story that is not being told about the importance of the choirs in Gospel music and Douglas Miller is a great example. They are all here, Flordia Mass Choir singing an early John P. Kee composition Jesus Is Mine,  what Choir compilation would be complete without Rev James Cleveland with the Charles Fold Singers on Jesus Is The Best Thing? There is also New Jerusalem singing one of their many hits from the pen of Jeff LaValley His Eye Is on the Sparrow, Brian Andrew Wilson doing his version of the song with the Mississippi Children’s Choir, Dr. Charles G. Hayes and Cosmopolitan Church of Prayer with Dianne Williams on lead singing Shelby Wills’ arrangement of the George Jordan classic Jesus Can Work It Out,  Mississippi Mass singing Its Good To Know Jesus, Walter Hawkins’ hit Thank You from Love Alive IV, Albertina Walker with James Cleveland and John McNeil back by Larry Roberts’ Trinity All Nations Choir on Please Be Patient with Me, and Albertina again with Calvin Bridges’ hit I Can Go To God In Prayer, Dorothy Norwood and Victory Is Mine, its all here. And that didn’t cover scratching the surface.

GF: Within the choir movement there were a number of songs that were attributed to stories about old ladies i.e. Georgia Mass’ Come On In The Room, that resonated with Gospel music fans.

Bob Marovich: Now you know the Pilgrim Jubilees had an old man but everyone else ahd an old lady, so if you can write a Gospel musical about an old lady,  you’ve got an endless supply to work from.

GF: Give us a summation of the essence of The Gospel According To Malaco.