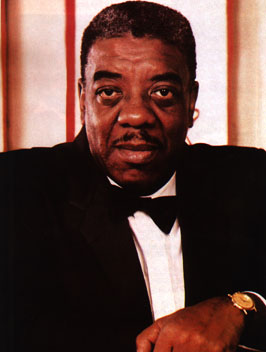 Gospelflava remembers the King of Gospel, Reverend James Cleveland on what would have been his 81st birthday.  Reverend Cleveland was born on December 5, 1931 in Chicago surrounded by the major gospel influences of all time namely, Thomas Dorsey, the Father of Gospel Music, Roberta Martin, famed gospel composer and Mahalia Jackson. It would be Roberta Martin that a young Cleveland would pattern his playing style after.

Cleveland relocated to Detroit to take on minister of music duties for Reverend CL Franklin (father of Aretha Franklin) and the New Bethel Baptist Church and later the Prayer Tabernacle Church under Reverend Charles Craig Sr.  It was at Prayer Tabernacle that James would record with the Voices of Tabernacle his first hit, The Love of God.

Cleveland signed with Savoy Records and in 1962 began a successful pairing with Reverend Lawrence Roberts and the Angelic Choir of the First Baptist Church of Nutley, NJ.  These albums produced such hits as Christ Is the Answer, So Good, How Great Thou Art, My God Can Do Anything and Peace Be Still.  James would later go on to found the Cornerstone Church in Los Angeles, Ca and his famed Southern California Community Choir and his greatest contribution, the Gospel Music Workshop of America.