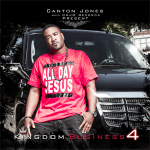 2013 begins a great year for Canton Jones as he is ordained and appointed to the office of Student Pastor for Fayetteville Georgia’s New Hope Church on Sunday, January 13th.  A family man, husband and father of three, Jones ministry encompasses youth outreach and discipleship.

Jones continues making a joyful noise with several collaborations; among them, Vickie Yohe on “So Many Reasons” and “I Won’t Give Up” with Gospel Super Producer Percy Bady. There is also the remix of Awesome featuring Canton, Pastor Charles Jenkins, Isaac Carree, Jessica Reedy and DA T.R.U.T.H; an “All Day Jesus Remix” with Canton, Angie Stone, Cory Condrey, and Joann Rosario Condrey; “You’ll be Here” with Jonathan Phillips; and Canton is featured along with Fred Hammond on Veronica Pertucci’s latest CD Made It Out Alive.