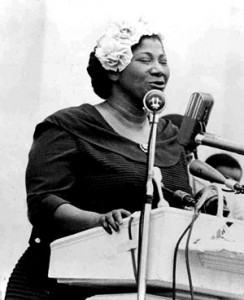 Plans to bring the life story of Mahalia Jackson to the silver screen advanced with the announcement of Bill Duke signing on to direct the film.  The director of A Rage In Harlem and Sister Act 2:Back In the Habit shared his thoughts: “Getting her story to the screen has been a passion project of mine for many years. When she sings ‘How I Got Over,’ it helps us all to believe that we can get over, too.”

Gospel Music’s first megastar, Jackson traveled across the world rightfully earning her the distinction as the world’s greatest Gospel singer. Her close association with Dr. King led to her unforgettable music performance at the March on Washington in 1963 and her influence on music landed her a spot in the Rock and Roll Hall of Fame. The Mahalia Jackson Story, written by Ruth Ratny, based on the book Just Mahalia Baby will be filmed in Chicago and feature the music of Mahalia including Move On Up A Little Higher and Thomas Dorsey’s Precious Lord, Take My Hand.